Of fish and fledglings

This month I had the pleasure of visiting with family at their lofty and spacious aerie overlooking the vine covered foothills of the Temecula wine country in Southern California. Their home is an expression of their love of nature and space where I always feel my spirit renewing in the glow of their love and the beautiful environment they have built in harmony with with nature.

A recent addition to this beautiful landscape is a Columbia Water Gardens designed pond in which a healthy community of nishikigoi – beautifully patterned koi fish – patrol crystal clear waters. They are a happy and casual lot, in a riot of colours as you can see from the gallery below – bright whites, oranges, reds, blues, blacks, creams, yellows and so many variations thereof. They co-exist harmoniously and are happy when feeding time comes.

Star of the pond is the charismatic ‘Patch’ with her pretty blue eyes and bossy ways, and she seems to have had some success with reproducing if the markings on some of the younger fish are anything to go by. 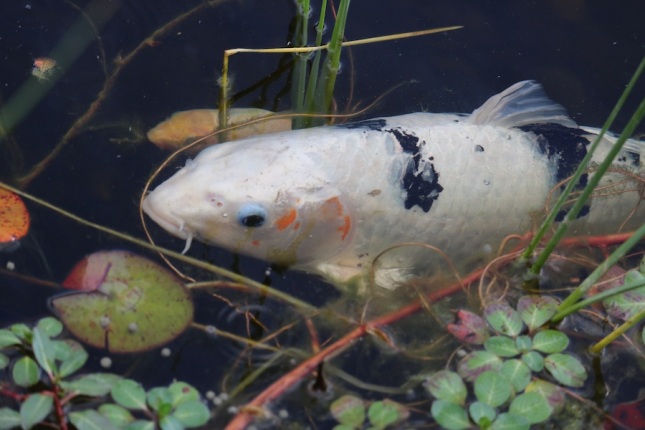 I love Patch, but there are two others who are a bit more elusive that catch my eye too. One I’ve named Tiger because of the large black strip on its back.

The other  (yet more elusive) favourite is the one I have named ‘Garnet’ for the way its colours flash orange and black like a spessartine garnet as it swims.

I could have photographed them for hours.  Come to think of it, I may have done.

As I rounded the pond photographing the fascinating fish,  I noticed that above the purr of rushing water was a ceaseless cheeping sound, and discovered to my delight a young fledgling bird poking its head out of a nearby birdbox.  It was, I later discovered, a baby Western Bluebird, and it had two siblings, and two harried parents working full time to feed the growing chicks.

The family of bluebirds was unafraid of us, and soon I was in the enviable position of being unable to decide which direction to turn my camera lens: towards the chicks and the adults tending to them, or the fluid colourful motions of the koi. I did my best to photograph both of these special scenes. 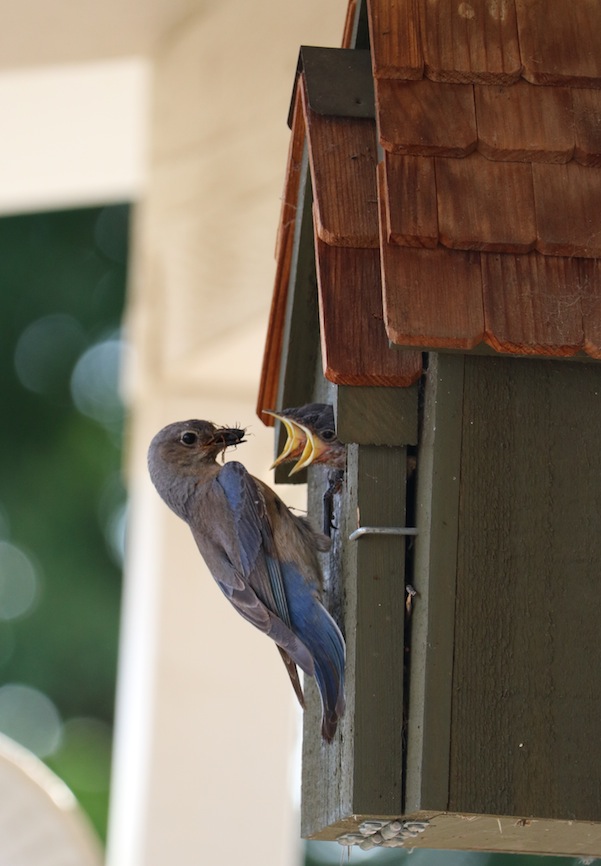 Later, as I flicked through the results, I was drawn to the interesting photo effects that occurred in several of the photographs.

The light illuminating the  wings of the bluebirds made them seem like angels’ wings.

In a different way, the light effects in the photos of the fish in the water also caught my attention.  I particularly like this photograph of Patch, in which the light bending in the water makes her look otherworldly.

A few of the photographs were so affected by colour reflections and water swirls that they were little more than a cacophany of colour, with just enough structure to suggest flowers, foliage and fish.  The light in these photos was bouncing off of flowers and fish, following lines in the water’s surface cut by the koi as they slipped and swirled in the pond.

These photographs  were for me an epiphany. They were the first images (photo or painting) that truly allowed me to understand Monet’s watercolour paintings. 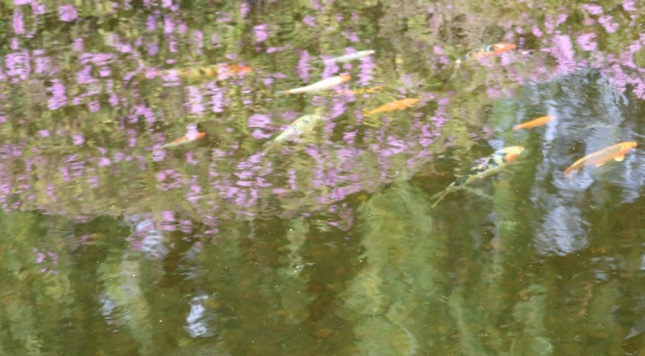 I always thought Claude Monet simply showed us his impressions of the world around us, but I can see now that he could truly see moments of liquid light in our real world that I had never consciously seen myself. And he didn’t have the benefit of freeze-frame photography.  He truly was a master of his craft and vision.  And now I will be better able to see the watercolour moments around me.

And this is where I leave the happy band of fish and fledglings. Until next time!

PHOTOGRAPHS:
All photographs by Sabrina Caldwell, May 2016. Other than the 3 crops noted below, and overall resizing for web use, no alterations have been done to any of the photographs.

Watercolour photographs were cropped to focus on the watercolour effect and Western Bluebird nestlings photograph was cropped to allow greater visibility of the chicks in the photo.

Posted by Sabrina Bleecker Caldwell on May 28, 2016 in Digital photography, Photo effects

8 responses to “Of fish and fledglings”